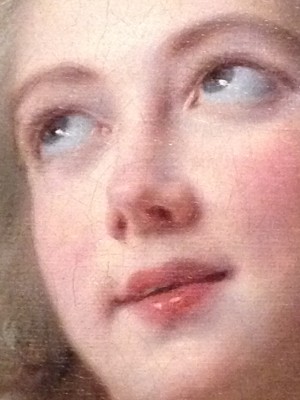 There were a small number of eighteenth century women artists that became prominent for their talent and teaching, the stylistic innovations they created, and their influence on other artists. Nowhere can this be better seen than in the life and works of the French painter Louise Élisabeth Vigée Le Brun.

Louise Élisabeth Vigée Le Brun (Marie Élisabeth Louise; 16 April 1755 – 30 March 1842) was born in Paris and was a prominent French painter of the time. Her flattering, elegant style is generally considered to be both Rococo and Neoclassical. When she was appointed the portrait painter to Marie Antoinette (leaving over 30 paintings of the Queen), Vigée Le Brun worked purely in the Rococo style, both in her colour choices and the style of her works. She left an incredible legacy of 660 portraits and 200 landscapes. 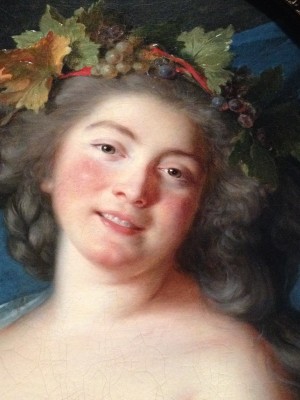 Detail. Bacchante, 1785. This work is a self portrait of Vigée Le Brun.

Amazingly, this exhibition at the Grand Palais in Paris is the first major retrospective devoted to the works of Vigée Le Brun, presented over 170 years after her death. The works shown are from an artist whose life covered one of the most turbulent times in European History,  from the reign of Louis XV to Louis-Philippe. Paris works are on show, but this exhibition collects together paintings and drawings from Italy, the Hapsburg Empire, Germany and Russia produced during her 12 years away from Paris with her daughter. This exile was enforced on her by the turmoil in France at that time and during these travels, she was entirely responsible for her own financial support.

Vigée Le Brun’s French citizenship was revoked when she left the country during the Revolution, and her husband was forced to divorce her on grounds of desertion. However, after the terrors she did return permanently to Paris because some of her fellow artists had petitioned for her citizenship to be renewed. She was reunited with her husband but without the official status of marriage. Her final return to France and later excursions to England and Switzerland are followed in the second half of the exhibition on the upper floor of the Grand Palais.

She was originally from a relatively modest background, her mother was a hairdresser from peasant stock and her father a talented portrait artist. Her father was Louis Vigee, a little-known portrait artist who worked in pastels. From the time she was small, he taught his daughter the skills of the trade. She proved to be somewhat of a prodigy. But her father, whom she adored, died when she was 12. By the time she was 15 , Louise had her own studio and was attracting an increasingly prestigious series of sitters. The brilliant young artist was accepted as a master painter at the Academy of Saint-Luc. This was necessary as she was making so much money at the time that she gained the attention of the law and was threatened with arrest for working without a license.  To remedy the situation she had to join this official Academy. A remarkable woman, she was determination to overcome obstacles hindering her career. 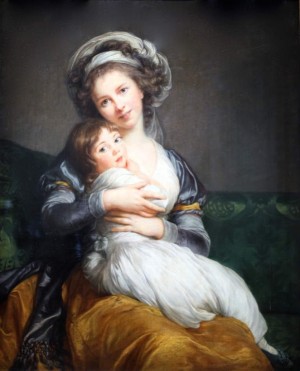 In 1776, she married the most important art dealer of her generation, Jean Baptiste Pierre Le Brun (1748-1813). They had one daughter, Julie, born in 1780. This marriage was a double edged sword as it not only prevented her from being accepted at the Royal Academy of Painting and Sculpture as strict regulations forbid any contact with the “mercantile professions”, but her husband also turned out to be a a philanderer, addicted to gambling and prostitutes, and he also relieved her of her earnings. However, this union did have a beneficial effect on her career. Her clientèle had mainly been the bourgeoisie, but in 1777, she started working for the aristocracy, descendants of royal blood and finally Queen Marie-Antoinette herself. It was not until 1783, however, and only at the intervention of the Queen’s husband, Louis XVI, that Vigée Le Brun was able to join the Royal Academy of Painting.

She published three volumes of her memoirs, entitled Souvenirs between 1835 and 1837.  She was a woman of much wit and charm, and these memoirs provide a lively account of her life and times. They can be read in English here. Le Brun lived to the age of 87 which was remarkable for a woman of her era. She died at her Paris residence in 1842.

Elizabeth was unusual in that she used self-portraits to assert her status, circulate her image and to show people the mother she had become, despite the constraints of being a “career woman”. Close to forty self-portraits are attributed to her. These paintings and drawings radiate her feminine grace, show her fine artistic skill and present to us her inherent pride she had in her calling. Her greatest coup de force was at the 1787 Exhibition where she presented two related paintings of motherhood. One was a portrait of Queen Marie-Antoinette surrounded by her children. This was an attempt by the monarchy to counterbalance the image the populous had of a Queen who was really an extravagant libertine. While some critics praised the picture, others remarked on the queen’s apparent air of distraction so the painting ultimately failed to rescue Marie-Antoinette’s public image. The second was a more personal and intimate portrait of the artist hugging her daughter, Julie. This is one of the most popular works by this painter owned by the Louvre, and has remained an icon of maternal tenderness since it was first exhibited, and the informal title is La Tendresse Maternelle.

“Painting and living have always been
one and the same thing for me.”

The Flemish master Peter Paul Rubens had a profound impact on Vigee-Lebrun’s color, glazing techniques, compositional approach, and use of light. She made copies from his Medici Cycle in the Luxembourg Palace while still a teenager. She was also particularly impressed with works she viewed on a trip to Flanders with her art dealer husband. 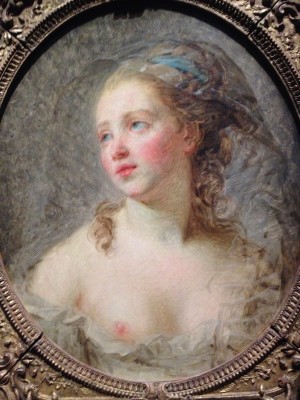 There is one painting that stands out in this Exhibition at the Grand Palais for me, as it appears more “unfinished” than the others. At least, it is in a different style, feeling less refined as it clearly shows her brush marks. Painted around 1780 to 1783, Jeune femme, figure d’expression is a fantasy figure of a beautiful young woman who, as the title suggests, is full of expression. For artists, this painting may give us some insight into her potential working methods. It almost looks like a full chroma under painting, as we can see how she has used the direction of the brush stokes to indicate the planes of the skin, and her distinctive warm and cool colour choices to bring the flesh to life. 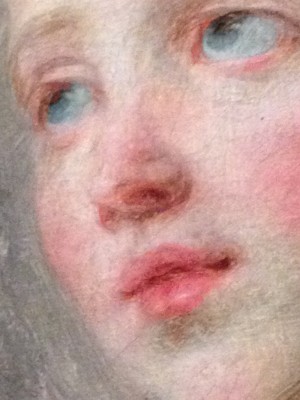 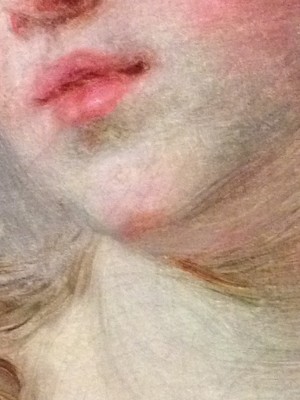 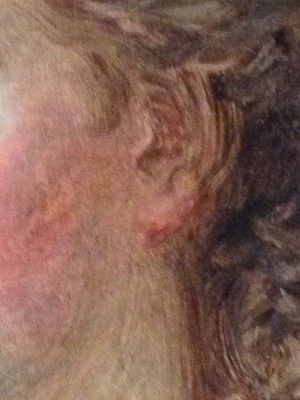 Over 160 works are presented, not only from Museums across the globe, but also from private collections, and it is these paintings that are a revelation in this exhibition.  These are the less well-known portraits that were painted during Vigée Le Brun’s emigration (1789–1802) when she was escaping the tumultuous French Revolution. They make this exhibition a unique opportunity to see works from almost the whole of her career. Her understanding of colour and her ability to convey not just the beauty, but the erotic magnetism of some of her sitters is on show.  However, do not be surprised that there is little development of her style over her life time of painting. There are also not many changes in the tried and tested structure of the individual portraits either; a single, usually indolent figure shown from the waist or mid thigh set against a simple background, wearing a sumptuous gown and a head dress or hat (most subjects were women), all in brilliant colours, with fine complexions, abundant hair, clear sparkling eyes and rosy cheeks and lips. You can sense that she certainly had the ability to please and flatter, especially for the women of high rank who sat for her. It makes her pictures a pleasant sojourn into the memory of an era of indulgence and luxury among the upper classes. Elizabeth knew what they wanted, and in her job as a professional portrait painter, she delivered it consistently. It was this very ability to produce animated visions of her sitters that made her popular within the elite circles. This flattering, this drawing out of the most visually pleasing aspects of a person, allowed her to achieve success in spite of obstacles due to her gender, her class or to the tumultuous political times in which she lived.  However, I am not sure if I am imposing a feeling of  melancholy on some of these paintings, or if in fact the feeling is palpable. History tells us that most of the people painted were living a lifestyle that was shortly to become extinct. They are staring out at us from the end of their world.

“The passion for painting was innate in me. This passion has never diminished; indeed, I believe it has only increased with time. Moreover, it is to this divine passion that I owe not only my fortune but also my happiness”.

Vigée Le Brun is being celebrated in this comprehensive exhibition of paintings, pastels and drawings not only in her native France, but also the exhibition is travelling to New York and Ottawa.