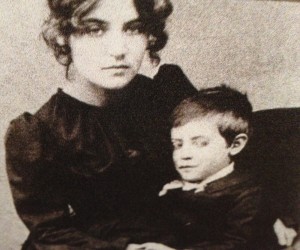 Suzanne Valadon (1865 – 1938) was a French painter and artists’ model. In 1894, Valadon was the first woman painter admitted to the Société Nationale des Beaux-Arts, although she never actually attended the academy or had any formal training at all.  Illegitimate, and brought up in poverty, she lived in Montmartre and started modelling at the age of 15 for artists such as Renoir and Henri de Toulouse-Lautrec. However, Valadon spent nearly 40 years as an artist in her own right. 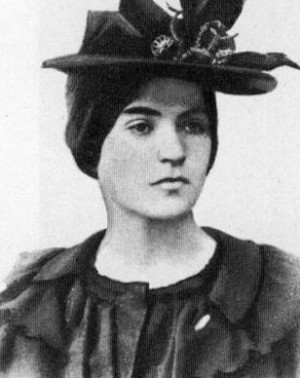 Valadon was beautiful, voluptuous and seductive but also a focused and ambitious woman who showed great determination throughout her life. She began to draw obsessively from a very young age, at seven, she used to draw using charcoal fallen from coal wagons with the sidewalks as her paper. She became an artist model after a fall from a trapeze ended her career as a circus acrobat. Born Marie-Clémentine Valadon, she initially began modelling under the name of Maria. A friend who was a model took her to artists’ studios, and she joined the other girls on Sundays at a sort of unofficial models’ market in the Place Pigalle. There, this striking and curvy girl had what one commentator called “luminous blue eyes that attracted men like flies”  and she did attract the attention of the very popular painter Pierre Puvis de Chavannes, who became her lover. Eventually Renoir, Degas, Modigliani, and many lesser-known artists also employed her.

She was a popular model. Probably the most recognisable painting of her would be in Renoir’s 1883 Dance at Bougival, this was the same year that she posed for him in City Dance and in 1885, she was the model for Girl Braiding Her Hair and a portrait called Suzanne Valadon. At this time, Suzanne and Renoir would stroll through Montmartre arm in arm, and nobody was in any doubt that they had become lovers.  They would go dancing at the Moulin de la Gatte on Sundays and picnic at Argenteuil and Chatou in the summer. Suzanne, in turn, studied Renoirs technique and paintings, he, however, remained dismissive of her artistic aspirations.

But it was another of her lovers, Toulouse-Lautrec, who nicknamed her “Suzanne” after the biblical story of Susanna and the Elders, as he felt that she especially liked modelling for older artists. It was in early 1887 that she had first met the twenty-two year old Henri Toulouse-Lautrec, who had the top floor studio at No.7 rue Tourlaque. This was the same building in which Suzanne, her mother Madeleine and her son Maurice were living. It is also the very same studio that today Studio Escalier, a private art school, use as their Paris base. Suzanne came to be considered the unofficial hostess of Lautrec’s studio soirées, where he would provide food and drink and lively conversation ensued. She was also Toulouse-Lautrec’s subject in his oil painting The Hangover, she, in turn, gave Lautrec the very first painting she completed signed “Suzanne Valadon”, the name he had given her.

Valadon came from a poor background and she herself did not know her father.  In 1883, when she was 18 and working for Renoir, Valadon gave birth to her son, Maurice Utrillo. Although his true paternity remains uncertain, Valadon’s friend Miguel Utrillo would eventually sign papers recognizing Maurice as his son. The mother and son had a ferociously intense relationship. Maurice was a difficult child, desperately jealous of the time his mother spend painting. He fell into alcoholism at a very young age, while still at school he would drink at bars, and for the rest of his life had brutal episodes of depression and melancholy. 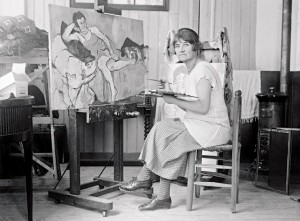 Valadon in her studio on Rue Cortot

Valadon had an unconventional life spent among some of the most famous artists, musicians, and writers of the time, but she was determined to succeed on her own terms. She eventually rose to become one of the most vibrant individuals ever to thrive in the fertile environment of the village on the butte.  In the early 1890s, with the encouragement of Toulouse-Lautrec, she befriended the elderly Degas who, impressed with her bold drawings and expressive paintings, purchased her work and encouraged her to continue. She remained one of Degas’s closest friends until his death. It was thanks to the support of Degas that she became the first woman ever to exhibit at the Société Nationale des Beaux-Arts in 1894. She had worked for thirteen years on her oil paintings before she exhibited them. Valadon was best known for her honest female nudes, it was at that time unusual for a woman artist to make female nudes her primary subject matter. Her first large oils for the Salon related mainly to sexual pleasure, and they were also some of the first examples in painting for the man to be an object of desire by a woman. Valadon’s work feature rich colors and bold, open brushwork often featuring firm black lines to define and outline her figures and to emphasize the play of light on curves and muscles. True to her individual nature, Valadon’s work is not related to the academic art of her time. Her subjects were women at their toilette, reclining nudes, still life and interior scenes many featuring flowers, she painted numerous self portraits and studies of her family and her lovers, and throughout his life, she used her son for portraits. Valadon left us around 300 drawings and over 450 oil paintings. 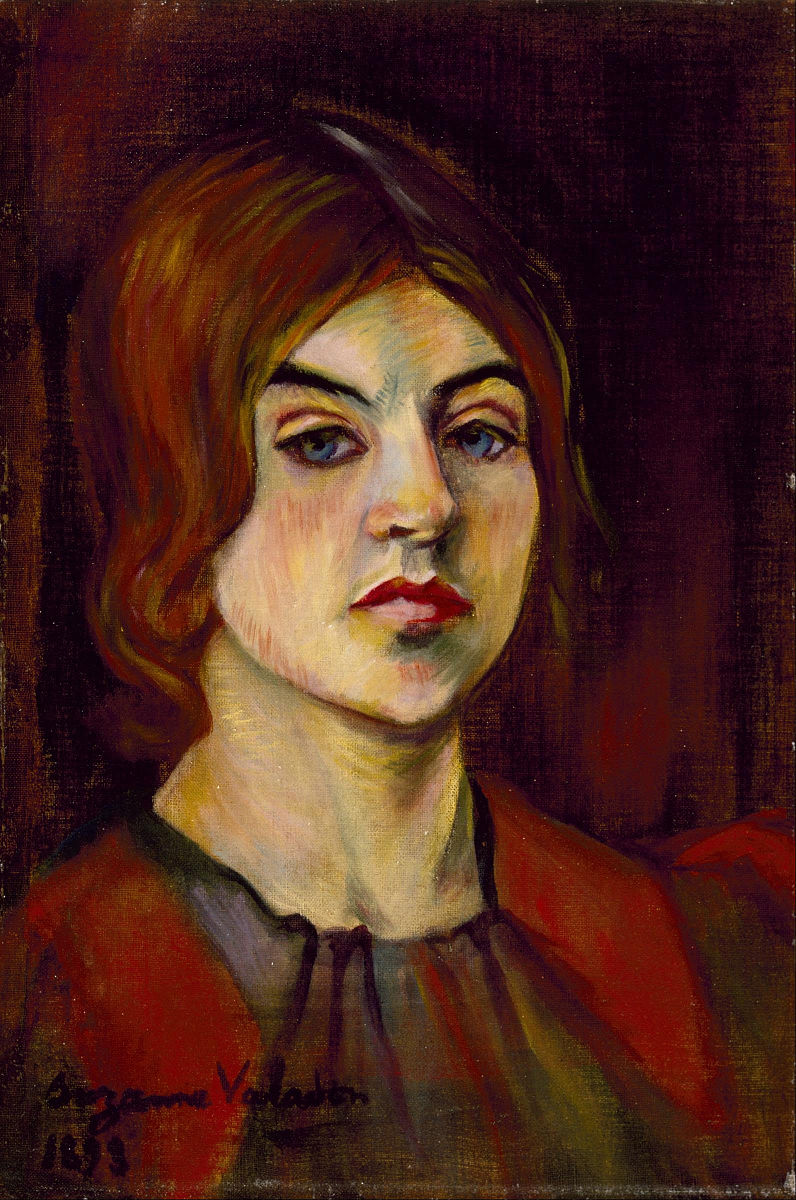 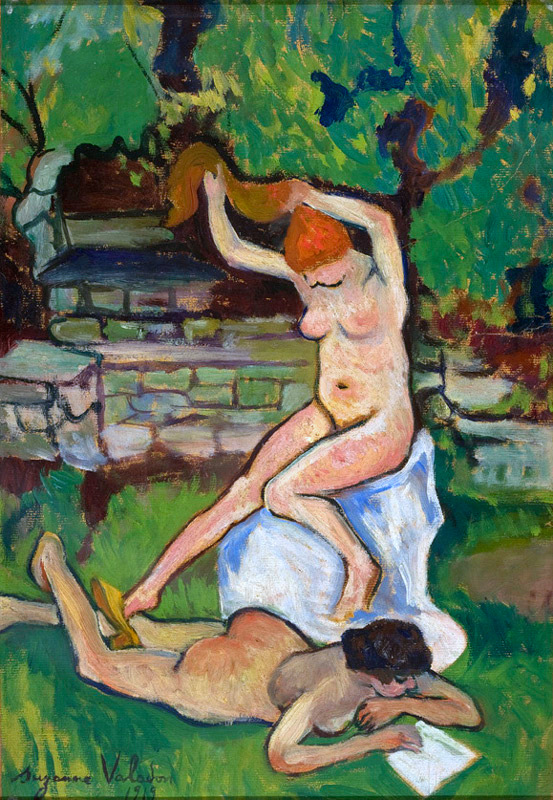 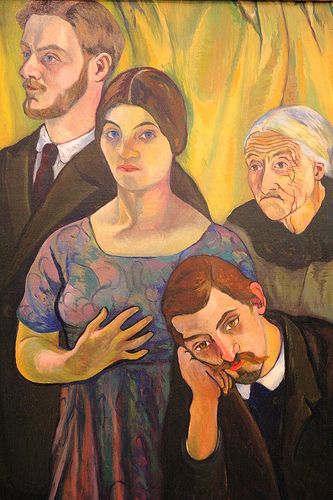 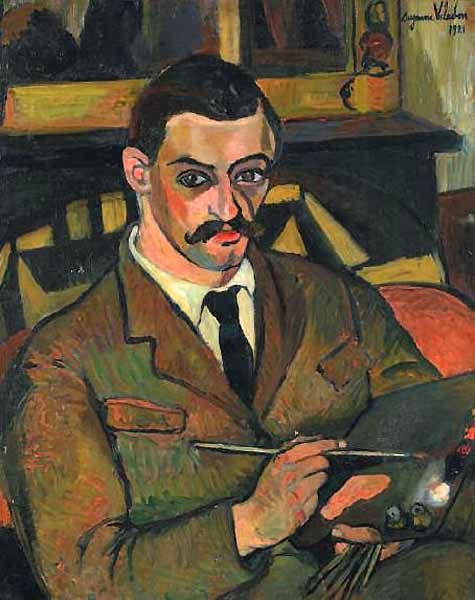 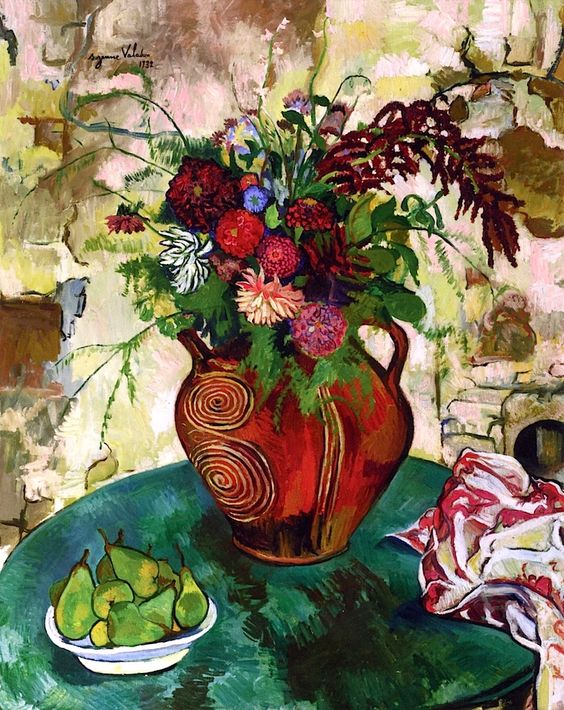 “Painting was the most difficult [medium] in which to reach greatness.”

Suzanne Valadon initially lived and worked at 12-14 rue Cortot, one of the oldest buildings in Montmartre, in 1898. She returned and lived there between 1912 and 1926 and created some of best known works in the studio there. The building is now the Musée de Montmartre. The recently reconstructed painting studio and apartment in which Suzanne Valadon, her then companion Utter and her son Maurice Utrillo lived and worked for many years is bewitching. Despite the disputes with André Utter, and the escapades of her alcoholic son, Suzanne Valadon spent the most creative years of her life painting in this studio. The reconstructed studio at Rue Cortot is a wonderful place to visit that gives you a true feeling of what life would have been like for artists at that time. 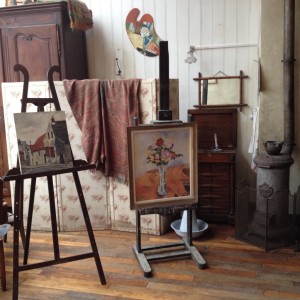 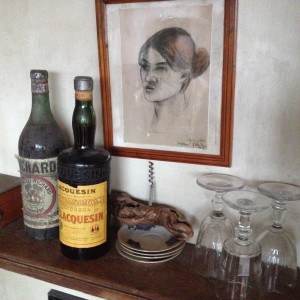 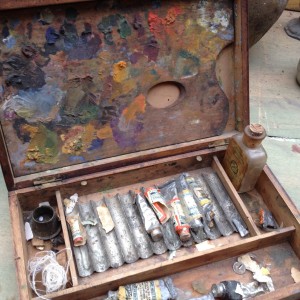 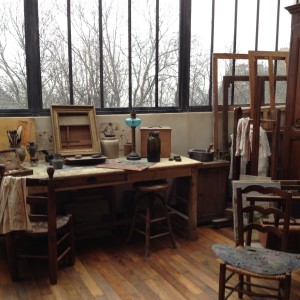 Table with her personal objects 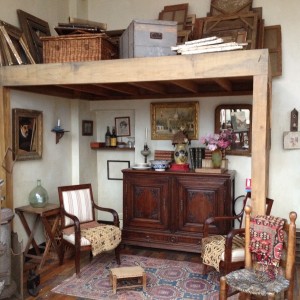 Storage of canvases and easy chairs in the studio 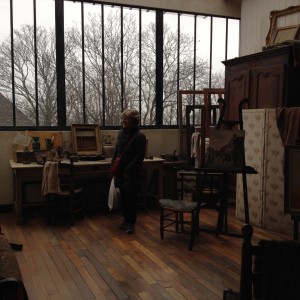 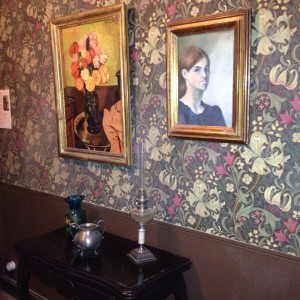 Her paintings are in evidence

Early in 1893, about 10 years after Valadon’s son was born, the French composer and pianist Erik Satie and Valadon began an affair. Satie proposed marriage after only their first night together. They never married, but Valadon did move to a room next to Satie’s in Rue Cortot. Satie became obsessed with her, calling her his Biqui, and writing passionately about “her whole being, lovely eyes, gentle hands, and tiny feet”. He also composed the Danses gothiques as a kind of prayer to restore his peace of mind, and Valadon painted a portrait of Satie that she gave to him. He was extremely jealous, particularly of her penchant for appearing in nightclubs wearing nothing but a mask. So, after only six months, she moved away, leaving Satie broken-hearted. He wrote her 300 letters and it is believed this was the only intimate relationship Satie ever had.

Aware that without financial stability, it would be difficult to support her aging mother and unstable son, at the age of 31, Valadon agreed to marry the stockbroker Paul Moussis in 1896. The understanding was that this would, with his money, bring the possibility for Suzanne to paint as much as she wished. However, Suzanne’s constant support of her son had a toll on the marriage and she eventually divorced Moussis in 1913. 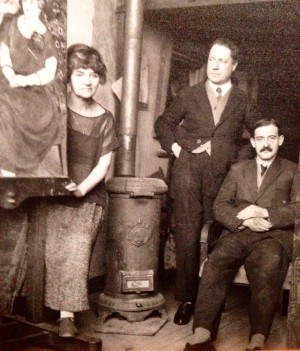 Valadon, Utter and her son Utrillo in their studio at Rue Cortot

But there was another reason that this marriage ended. In 1909, when 44 years old, Suzanne had fallen under the spell of the 23 year old would be painter André Utter, one of her son’s friends. During the first years of this relationship she produced some of her most beautiful paintings. She worked with a broader palette of fauvist-inflected colors and larger canvases such as Adam and Eve, the first painting by a woman of a nude man and woman together.  It was a portrait of herself and Utter, who had become her muse. But although her paintings now sold regularly, her success never equalled that of her son Utrillo, who sold his paintings for significant amounts of money. Sadly, the proceeds received by her alcoholic son were mainly spent on alcohol. Although protective of her art and of her own independence, Valadon never ceased to love her son fiercely. She considered him a genius.

Soon after her mother’s death in 1914, Suzanne married Utter. It was just before he was mobilised for World War I, and the couple were married so that Suzanne could get the soldiers wife’s allowance. During the war years, Suzanne had great success with her paintings. She became close friends with Modigliani, about whom she was always discreet. For his part, Modigliani claimed, “She is the only woman who ever understood me.” After his return, Utter, Valadon and Utrillo had a good lifestyle due to the success of both Valadon and Utrillo. Valadon and Utter also regularly exhibited work together, but sadly, she was jealous of Utter’s youth, and of his numerous affairs, while he was jealous of her success and of her constant support for her son. However, Valadon was generous and shared what she had. She became notorious for throwing huge picnics, and she would spontaneously take 50 children off the streets treating them to a visit to the circus. She also would give money to every clochard (vagrant) she encountered. Utter eventually managed her career as well as her son’s. Aware of Utrillo’s potential, it is said that he locked Utrillo inside a room in their house, ordering him to paint. This sort of behaviour created violent scenes, and Utter ultimately left Suzanne and the couple were divorced in 1934.

In her later years she clothed herself in rags, walked around in huge moccasins, smoked a pipe, and flirted with all the men she met. But her love life was not over. At the age of 70, she found a Russian partner who was half her age. He was called Gazi, he painted and played the guitar, he also did her shopping, cooked her meals, and serenaded her with songs that he wrote. Suzanne Valadon died of a stroke in 1938 which she had while painting at her easel. Unable to deal with his mother’s death, Maurice Utrillo did not attend the funeral, and it was André Utter who accompanied the casket to Saint-Pierre de Montmartre, where Suzanne Valadon is buried. Both an asteroid (6937 Valadon) and a crater on Venus are named in her honor. The small square at the base of the Montmartre funicular in Paris is named Place Suzanne Valadon.

‘My work … is finished and the only satisfaction I gain from it is that I have never surrendered. I have never betrayed anything that I believed in.’

A novel based on Valadon’s life by Elaine Todd Koren was published in 2001, entitled Suzanne: of Love and Art