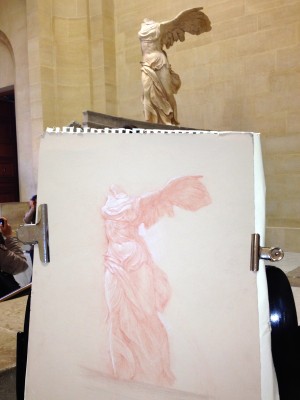 The Winged Victory of Samothrace, also called the Nike of Samothrace, is a 2nd-century BC marble sculpture of the Greek goddess Nike. She is one of the most beautiful statues at the Louvre, and one of their most famous. However, after more than a century in Paris, she needed a good clean.  She was very grubby and a dark yellow colour from both dirt and yellowing paints and varnishes applied during earlier conservation efforts. In 2015,  the restorers carefully revealed the original creamy white shade of marble. She, in turn, revealed some secrets. They discovered a curl of hair around the neck which had been covered with the 19th-century plaster that was holding the pieces together. In addition, seven fragments from the museum’s reserves that had been unattached have been integrated. Now, you can see the details of the  vigorous movement of her body and her billowing drapery more clearly than ever.

The first time she was exhibited in the Louvre was in the courtyard, in 1879.

She is inspirational. I have been drawing her from different angles, which is no mean feat as there are thousands of people who come to see her everyday. What I did not realise until I started drawing her was that the statue is not all original. When she came to Paris, the statue’s right wing was missing, and a fragment that connected the left wing with the torso. The restoration experts at the time did something that would never be done now. They sculpted a new right wing in plaster, symmetrical to the original left one. They also created the missing left breast, which was needed to connect the original wing to the torso.

Although today experts agree that these reconstitutions are historically inaccurate, the current restoration team decided to leave the modifications untouched.  Ludovic Laugier, the head of the Antiquity department at the Louvre Museum, who oversaw the restoration, felt that the statue as she is is not only a testimony of Hellenistic fine art, but also an example of 19th-century art taste. The green sections are the 19th-century additions.

The present day restorers were able to add some fragments of the drapery and the left wing’s superior flight feather which had been brought back to Paris by the original Champoiseau expedition that discovered her. Even though the fragments on the drapery are difficult to notice, the added feather does make a difference. But this lady had a further shock for us. More surprisingly, she might have been painted blue. Giovani Verri, from the Courtauld Institute of Art found microscopic traces of blue paint, with at least a blue fringe on the drapery, and blue pigments on the wing.

O. Benndorf and K. von Zumbusch. Reconstruction of the Victory of Samothrace in Plaster, now lost. 1875-1880

I hope that one day, someone, somewhere, in a museum or private collection, will look at a beautiful female marble head in their collection and wonder what statue it came from.  She does not need her head to be beautiful, but I am not alone wondering what she might have looked like complete. When she was first discovered and bought to Paris, there was a reconstruction made, which is now lost.

I have more views of Nike to draw as she is such an inspiration to me. To see those I have done already, please look at the Museum Drawings page.

One thought on “Victory of Samothrace”